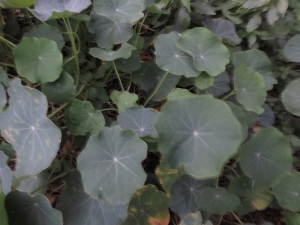 In the name of photo-honesty I sometimes think all photos should say what effects were used in their processing. Imagine if we were told what processes were used on the food we buy.

On other occasions the photographer might say what he hoped had happened as I would for this photo. I had no time, no tripod, it was dark and hence the slight shake as the point and shoot camera tried its best in low light resulting in a long exposure time. I also have very little capacity on this travel laptop for any photo fixing software so even cropping is difficult. Frankly it wouldn’t help anyway.

So let’s just agree that I hoped for that trendy slight shake effect and didn’t quite get enough shall we?

But actually I want this down to earth, no glamour picture to reinforce the workman-like nature of our food. If you look up Nasturtiums you’ll get a blurb about edible flower and colourful pictures. Very nice. (Tarts for the bees?) But the leaves are where it’s at for me. They also have the distinctive peppery taste, are more numerous, you get your green hit, they are rich in vitamin C and are antibiotic.

You’ll probably not like the look of the really old leaves but even the larger ones are tender enough to eat raw – I use them instead of rocket in my cheese sandwich. In fact they really lose any strong pepperiness once in a cheese sandwich. Some use the large leaves for dolmades. Ok, glam up the salad with the flowers if you want. (Turning soft in my old age.)

“The name nasturtium comes from the Latin words for nose (nas), and tortum (twist), referring to a persons’ reaction upon tasting the spicy, bittersweet leaves. Renaissance botanists named it after watercress, (Nasturtium officinale in Latin) which tastes similar.”  – http://www.reneesgarden.com/articles/nasturtiums.html

“Nasturtiums are easy to grow and aren’t picky about soil, light or water. Rich soil produces lots of leaves, poor soil lots of blossoms. Thus they are a natural indicator of the quality of your soil. The seeds, which germinate in a week to 10 days, are large so they make a good project for kid hands.” – http://www.eattheweeds.com/nasturtiums-natures-nose-nabber/

So keep an eye out for this plant in the wild for your foraging. Or plant some in your garden as many believe they draw aphids away from your other plants and they really thrive. Well they would wouldn’t they, what with being a “weed”…